Om de put ( Around the pit)

This game has been made with touchtables in mind. Om de put is a game that allows the player(s) to build the construction area, yet they have to take into account what kind of pilesheets they use, whether to add 'stempels' or not, and so on.

Om de put tries to be a game which leads to discussions. For example, between constructors and citizens neighbouring the newly to build construction pit. Therefore the game has been made suitable for touch tables. Unity was used to create this game, and most of the default GUI elements works really well on touch screens, as long as they emulate some kind of mouse. Unfortunately I have not had the time to work on Unity and multi touch interfaces, except for on mobile devices. Therefore I do not know how well that works.

The most important elements in making a game (or an application) suitable for touch tables are, in my opinion the following:

When you are building a touch table application, be sure to take those two elements into account. 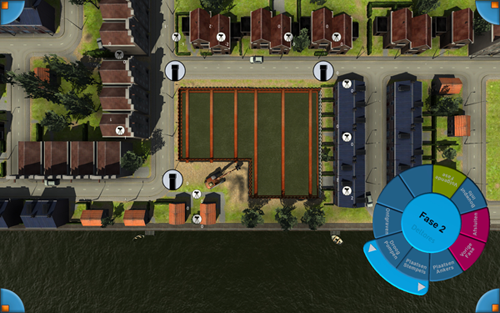 You can also check out Om de put at the Deltares website.